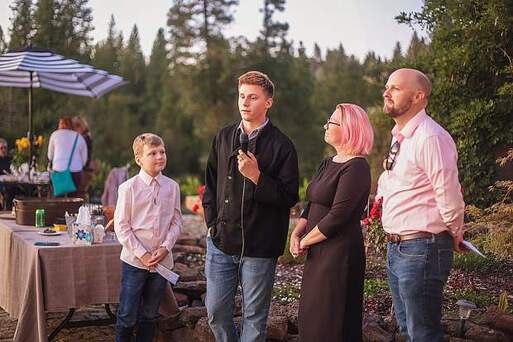 
Jia Christopher, middle right, has her son speak during a fundraising event last week. Christopher is creating a foundation to honor her dead daughter Neve, and give back to different communities.


As Christopher was preparing for a Caesarean section, she called Nevada County’s Akhila Murphy, a death doula — someone who facilitates the end-of-life process.
“For that to come into your ears is pretty shocking,” said Murphy, who as a co-founder of Full Circle of Living & Dying, had never dealt with a stillbirth before. Murphy acted as the couple’s advocate, helping answer questions about keeping Neve in the room with them to say goodbye, and inquiring about the Christophers personally transferring their daughter to the crematorium.

Due to the Christophers’ openness and forwardness, and the assistance of Murphy, they were able to stay with their daughter for a few days in the hospital and remain with her until she was cremated. “It was important to us that our baby was with us the whole time,” said Christopher.
Months later, the family wanted to honor their child, and give back.

As of Monday, they raised over $10,000 and purchased two Caring Cradles — one being donated to Sierra Nevada Memorial Hospital and the other to Mercy Hospital of Folsom, the latter where Christopher gave birth — to thank Akhila Murphy for her help. The cradles work to slow the decomposition process, providing parents who experience stillbirth more time with their newborn. Since a fundraising event last week, Christopher said the family is about halfway to purchasing another Caring Cradle, and are working to establish a foundation in Neve’s honor. Future money raised will be used to purchase and donate cradles.
​
HELP DURING GRIEF
While in the hospital, the Christophers didn’t know who to call when they learned of the death of their child. But they needed help, and Christopher, who had been tracking Murphy’s work, decided to reach out. “Of all of the people in the world that I needed, it was a total stranger, and it was Akhila Murphy,” said Christopher. Because of the shock experienced by the family, Christopher said Murphy’s help was critical. Being someone they could speak with, who could speak on their behalf, and who could transmit their questions about hospital policy regarding infant death was incredibly helpful.
“She made so many difficult phone calls,” said Christopher, later adding, “She became our advocate.”
What Murphy gave them — and what the Christophers hope to provide others — is time. The parents wanted things to slow down so they could study Neve’s face and memorize her features before having to leave the hospital, and officially say goodbye to their daughter. “Basically the clock is ticking and you’ll never get to see them again,” said Christopher.
Without a Caring Cradle of their own, the Christophers put their baby in ice to slow the decomposition process.
Murphy, meanwhile, was working with the family’s birth doula and talking with hospital staff about the Christophers’ options.
“I will always appreciate (Murphy’s) kindness to us at the hardest time of our life,” said Christopher.

GIVING BACK
Months later, Christopher wanted to give back, and honor her daughter’s legacy. She found that hospitals often don’t have something like a Caring Cradle because they aren’t considered a “medical necessity.” Initially anticipating only purchasing one cradle for the Folsom hospital, she was surprised when an outpouring of community support allowed her to purchase a second one — and likely more in the near future.
“I think the hardest thing for when you lose a baby or a child is thinking their story is over,” she said. “Her story isn’t over now.”
To thank Murphy for her help and guidance, the Christophers decided to donate a cradle to Nevada County’s Sierra Nevada Memorial Hospital.
“It is going to be wonderful for us to have anything at the facility that brings greater comfort and peace to families who suffered a tragedy,” said Sierra Nevada Memorial Hospital Foundation Executive Director Kimberly Parker, adding that she didn’t know when the cradle would arrive at the hospital.
When Murphy learned about the gift, she was in tears.
“This, to me, is a huge victory,” she said, adding that it’s also an opportunity for hospitals to expand how they consider and practice death.
The family’s forwardness and openness about the process, said Murphy, allowed their friends to more easily speak to them about the tragedy and help them through it. “I feel like it was therapeutic for them,” she said.

For Christopher and her family, helping others was not just one possible way forward, it was the best way to navigate life.
“I wanted to show my son, when something terrible happens, the best way to heal is to do something good,” she said.
To contact Staff Writer Sam Corey at scorey@theunion.com or call 530-477-4219.