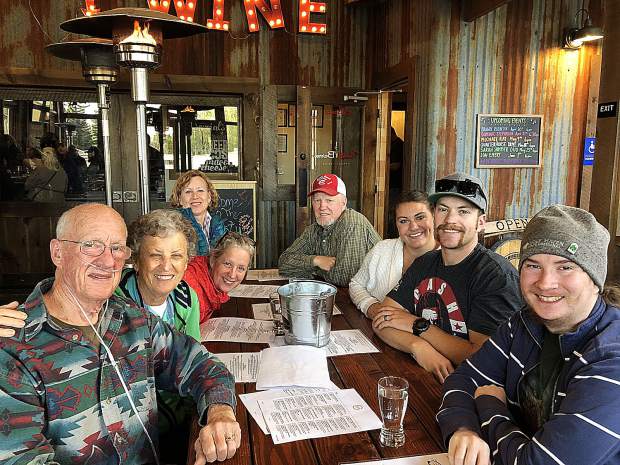 Dick Shannon (far left) took two years to do everything he wanted to accomplish before dying in May of 2018.

Photo submitted by Will Corbett

On May 1, 2018, Dick Shannon died.
It wasn’t sudden. Shannon was living with a terminal illness, and, at the age of 76, a man who, sources say, took life into his own hands did the same thing with his death on that Tuesday morning.

Surrounded by loved ones and with his wife Deleaua Shannon by his side, Dick drank a drug cocktail that ended his life.

Prior to this, Shannon had planned the last bits of his life. He visited family members around the country, bought a red Tesla, built his own coffin with his son-in-law and held a celebration of life ceremony with friends and family members. But maybe most unique about Shannon’s last day on Earth was the presence of a production team standing in the room with him. Shannon was being filmed by HBO.

The man and his family who live in Nevada County are part of a documentary called “Alternate Endings: Six new ways to die in America.” The film is about dying individuals and their families taking the dying and death process into their control, determining how the end of life should be.
It highlighted living wakes, the construction of a coral reef with remains from a dead individual, a green burial and more.
The documentary first aired Aug. 14.

ADVOCATING FOR THE DYING
In 2016, the End of Life Option Act was signed into law in California. The law allows some terminally ill adults to request medicine to peacefully end their lives. The Shannons were advocating for the bill’s passage prior to Dick’s diagnosis.
“Both of my parents felt strongly that dying should be a personal choice,” said Desirae Corbett, Shannon’s daughter.
In May of 2016 — one month before the bill’s enactment — Shannon received a six-month terminal diagnosis, said Will Corbett, Shannon’s son-in-law. It was a rare form of cancer with no known treatment, and would eventually lead to internal suffocation.
Shannon had tried to make intentional choices about everything else in his life, said Will. His dying and death were no different.
“When death became part of our lives, we were able to talk about it,” said Will.
Death Doula and Co-Founder of Full Circle of Living & Dying Akhila Murphy said the family didn’t shy away from anything when they called her to do an in-home consultation.
“They were open in the conversation about his end of life,” she said.
It was the Full Circle organization, said Murphy, that put HBO in touch with Shannon.
Although the family was only captured for about 15 minutes in the documentary, “They were told (HBO) really could have made a whole film about the Shannons,” said Murphy.
Murphy thought the family brave for putting themselves on camera during such intimate moments.

THE DYING PROCESS
After his diagnosis, Shannon lived the next two years of his life under his own direction.
“‘You have a choice,’” he told his son-in-law before he died about the end-of-life process, “‘and you should at least investigate that choice.’”
An electrical engineer, Shannon signed up to buy a model 3 Tesla, said Will. With a short time to live, Tesla went out of their way to sell him the car.
“Within a week, Tesla was calling him and saying they want to get you your car now,” said Will. Today, Shannon’s son drives the electric vehicle almost every day.

Will and his father-in-law did many projects over the years, he said. They maintained a relationship partially around building things. Their final project was building Shannon’s final resting place.
“It was amazing, it was surreal, it was sad,” said Will. “It was everything you can possibly imagine.”
Shannon held a celebration-of-life ceremony. He and others are depicted exploring a range of emotions.
“We’re here to celebrate life,” Shannon said in the film. “All of it, but especially the end. My end.”
Shannon ended his life in his Wolf Creek Lodge apartment.
His wife Deleaua opted for a home funeral. Upon his death, her husband laid in the apartment for three days during which the family had time to say goodbye and honor their loved one.

SOFTENING DEATH
Will worked as a firefighter for 30 years, he said, and experienced death on many occasions. It was his father-in-law’s death, however, that changed his perspective.
“This sort of washed some of the demons that I had away,” he said.
His wife agreed. It gave her a softer interpretation of dying.
“People are afraid to die and people don’t need to be,” she said.
Mostly, Will said it was the family’s willingness to look death in the face, openly and earnestly, that made the difficult process more complex and beautiful.
“By the time the death comes around, you’ve grieved for two years already,” he said.“It’s so much harder when you have that initial shock.”
Today, Will said he’s become a quasi-advocate for dying with dignity, providing some terminally ill individuals the option to control their dying.
His wife changed too. Her father’s death altered how she lives her life.
“It’s another reminder that life is precious,” she said. “Small things don’t really matter.”
Toward the end of the Shannon family’s experience in the film, a quote from philosopher Friedrich Nietzsche flashed across the screen.
“To die proudly when it is no longer possible to live proudly. Death of one’s own free choice, death at the proper time, with a clear head and with joyfulness, consummated in the midst of children and witnesses: so that an actual leave-taking is possible while he who is leaving is still there.”
To contact Staff Writer Sam Corey, email scorey@theunion.com or call 530-477-4219