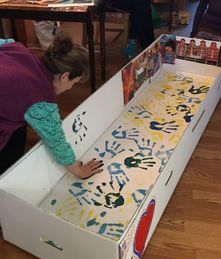 HomeFuneralAkhila-TWI-060217
Recently Diana had an experience that profoundly affected her life and changed her forever. She attended the funeral of a friend's son. The death of her friend's son was not what affected her, it was the funeral itself. How does a funeral profoundly affect one's life and change one forever? It does, if it is a home funeral.
What is a home funeral? — a question asked by many. Diana didn't know what a home funeral was either, not until she recently attended the home funeral of her friend's son. In her words, "A home funeral is the marriage between a funeral and a celebration of life."
"When I walked in, the first thing that my friend said to me was, 'Come in and see my beautiful son.' She said this with love and peace, like her son was in the living room in a rocking chair."
In fact, Diana's friend's son was lying in honor in a cardboard casket in the living room. "He looked like he was sleeping," explains Diana. "I got to sit with him."
The young man's body had been washed and prepared for the funeral by the family but with the guidance of Full Circle Living & Dying Collective, founded by death care midwife Akhila Murphy.

At this particular home funeral, people were milling around, talking and eating, singing and listening to music. They talked a lot about the deceased and asked questions about him as he lie peacefully in the room as the center of attention. People approached and talked to him, held his hand and admired his belongings, achievements, his artwork and photos, all of which had been placed strategically around his body. "I stayed four to five hours," explained Diana. I felt like I had entered an alternate universe. Even though I didn't know the young man personally, I got to know him by talking to others. It was compelling, and I wanted to stay there."
Diana's reaction to the home funeral is not uncommon.

According to Murphy, people are often deeply moved. "Allowing families to have time with their loved one, to wash and dress the body in favorite clothes, to touch the body and to reminisce, allows family members to work through their own grief," explains Murphy.
​
Before Diana attended this home funeral, she had paid little thought to her own death. However, she now wants a home funeral for herself. "Before, I didn't think about what I wanted when I died," explains Diana. "But now I want a home funeral, and I will let people know what I want. It was a beautiful, fascinating  experience."
For more information about Full Circle Living & Dying Collective services and events, check the website at http://www.fullcirclelivingdyingcollective.com, or call Akhila Murphy at (916) 397-5443.                           — Linda Chaiko-Lepley