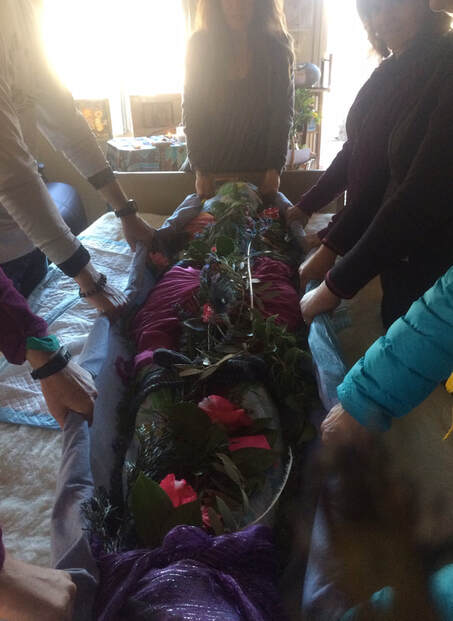 ​
Full Circle of Living & Dying help honor the dead and the dying process, offering to help with home funerals if they are desired by the dying person and their loved ones.

About a year ago, Pamela Yazell’s husband was dying.
Bob Yazell had stage four prostate cancer that was spreading through his body.

Pamela Yazell wanted to find a way to celebrate, mourn and honor her husband through dying and death. For a long time, Bob Yazell did not care for this, but he later became convinced otherwise.
“Don’t forget,” Pamela Yazell had said to him, “this is not just for you, it’s for me, too.”

While at a caretaker support group, Pamela Yazell was shown a video about home funerals and told about Akhila Murphy, the co-founder of Full Circle of Living & Dying. The Nevada County organization, dedicated to educating and empowering families and the dying through the process of death, became a nonprofit in January.
For much of 2018, the Yazell’s worked with Murphy on preparing for the dying process, including talks about funerals, what to do with the remains and post-death financial logistics.
“I think it helped both of us come to a really strong realization that death is not the end, it’s just part of the circle,” said Pamela Yazell.
On May 29 of last year, Bob Yazell died. Soon after, Pamela Yazell said family and friends were at her home to honor her husband.

ACKNOWLEDGING DEATH
Murphy, who co-founded Full Circle with Nandi Szabo and Amber Hill, gained interest in death work while working at Hospice of the Foothills in 2009. There, Murphy connected with a patient, caring for him for seven months. “We had a real spiritual experience together during one of our sessions,” she said. “It just made me realize there’s more to dying than it just being the end of life.”

After her time with him, Murphy took a 2013 course on home funerals, and subsequent courses on the end-of-life process.
“I never saw so many beautiful images of people in the hand-painted caskets, and people doing the washing themselves and taking this on,” she said, referring to her initial reaction to home funerals.

DEATH DOULAS, EXPLAINED
Today, the nonmedical team of 10 that comprises Full Circle offers advance planning, emotional support, education on home funerals, grief counseling and more.
“(A death) doula works not only with the dying patient but whoever is the caregiver, whether it’s family or friends or community — (he or she) works with all of them in assisting in this process of coming to terms with dying,” said Murphy.
Death doula organizations generally operate this way as a facilitator of the dying person and dying process. There is evidence that death doulas are becoming more commonplace as an international organization was founded in 2015, and several other similar organizations recently cropped up.
“We are unique in some ways,” said Murphy of her organization. “We sort of fill in the gaps,” providing services distinguishable from hospice and palliative care.

HOW IT WORKS
It frequently starts with a call. Someone dials Murphy’s number, and informs her of an individual who is dying. Murphy said that person asks her questions about how they can move through the dying process.
Murphy often goes to the home with one other doula and asks about what the dying person and loved ones want during the dying, death and post-death process. They create an end-of-life document, covering desires related to pre-death celebrations, home funerals and the financial logistics needed to be resolved after the death.
“We bring up things you might not expect like, ‘what’s the most important thing for you right now?’” said Murphy, of something she asked a dying individual.
Since January, Full Circle of Living & Dying has received donations and charged a consultation fee on a sliding scale. If a family can’t afford their services, they won’t turn them away, said Murphy.
Last year, Murphy said she would get a couple calls per month, but just this last month she’s received four or five calls per week.

‘IT REDUCES FEAR’
After reading an article in The Union about the Medical Aid in Dying Act, Martha Turner reached out to Murphy to join Full Circle.
Turner, now retired after working as a midwife for 30 years, became the nonprofit’s secretary over a year ago.
Turner said death doulas allocate control and autonomy to people over the dying process.
“That moves (death) out of the darkness — the fear of ‘oh my God, someone’s going to die,” she said. “(Now), it’s like, ‘OK, how can we do this?’”
Normalizing the dying process, and having a home funeral, is particularly helpful for children, said Turner, alleviating their concerns by facing death directly.
“It reduces fear,” she said. “It adds light and air to this subject of death that we tend to not look at very closely.”

‘I HONOR YOU’
Pamela Yazell stayed with her husband, holding his hand the night he was dying.
“I told him I loved him, and it was okay,” she said. “I let him go.”
Before Bob Yazell died, he and his wife decided to have a home funeral, and to cremate his corpse. Hospice came to do the final pronouncement after his death, and within the next few days close friends, children, grandchildren and Murphy came to perform the anointing of his body, said Pamela Yazell. Everyone helped wash and redress Bob Yazell’s body before placing him in a cardboard box.
“We surrounded him with everything,” said Pamela Yazell, including her husband’s favorite San Francisco 49ers memorabilia and golf clubs — someone even stuck a golf ball under his hand.
“It’s much, much more than a physical thing, it’s more of a spiritual thing,” Pamela Yazell said of the dying process. “It’s the closest thing to being in touch with something way, way beyond yourself.”
Pamela Yazell said the home funeral brought her family together in a unique way, allowing everyone to properly say goodbye to Bob Yazell the way they wanted to.
Pamela remembers saying a lot to her deceased husband, but maybe one thing stuck with her most.
“I honor you and I honor that you were here on this Earth with me.”
​
Contact Sam Corey at 530-477-4219 or at scorey@theunion.com.

Hide Captions
WHAT TO KNOW
What: Full Circle of Living & Dying death doula organization
Contact: Akhila Murphy at 530-432-6929 or 916-397-5443 or at akhila@fullcirclelivingdyingcollective.com