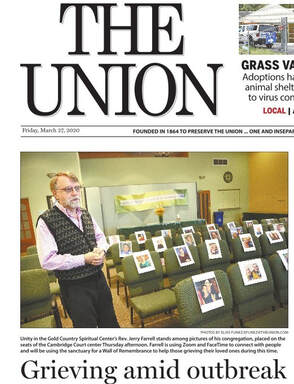 Across the Atlantic, in late February, Rev. Jerry Farrell’s brother fell sick in London and died.
The cause was a pre-existing condition, unrelated to the coronavirus, but for fear of contracting and spreading the virus to his congregation, Farrell, the lead minister at Unity in the Gold Country Spiritual Center in Grass Valley, decided not to attend his brother’s funeral across the ocean. He did try to virtually connect to the March 10 memorial service, but the internet was too spotty, he said.
For the reverend, a native of Ireland, honoring the dead is a deep part of his life and his birth country’s national culture, a place that is notorious for its wakes, where people fully embrace the dying process.
Farrell, who worked with local hospice for five years, is now navigating his bereavement with no physical contact, and limited contact with friends and family members via texts, calls and video conferencing. He said that while the calls help, his “grief is parked,” awaiting a time, hopefully in the future, when he can hold a memorial service to honor and remember his brother with his family and possibly his congregation, too.
“It’s challenging, it’s difficult, it’s sort of surreal,” said Farrell. “It happened, but there’s no evidence that it happened. We have these things for a reason. They’re necessary and healing. If we don’t deal with it now, it gets backlogged.”
Death doula and cofounder of the local Full Circle of Living & Dying nonprofit, Akhila Murphy said her hospice volunteer group is no longer conducting in-person bereavement support. Full Circle has also suspended its volunteers from entering peoples’ homes to prepare for a death or grieve a dying person. Now, she’s mostly connecting with people via phone calls and social media to offer support.
Nonetheless, she said bereavement and the grieving process is trickier, and often more difficult, in a moment of physical distancing, especially for those who don’t want to die alone.
“This is particularly perplexing,” she said. “If someone is dying, how do we do this?”

GRIEVING FROM A DISTANCE
While maybe only statistics for some, the rising death toll from the coronavirus -- at 1,186 in the U.S. as of Thursday afternoon — has a real impact on the lives of many. And deaths from COVID-19 are not the only concern for people and public health experts.
As Ron Klain, former Ebola czar for the Obama Administration, explained, non-coronavirus deaths could rise as health care professionals become more concerned with preventing the spread of COVID-19 and treating patients with the virus.

For many in this country and around the world, there’s a common desire to be with their loved ones as they die, to hold their hands and comfort them through the process and physically emote their grieving with others — which is difficult, when, to prevent the spread of a pandemic, health experts urge people to keep six-feet of distance.

Placer County resident Jonathan Hoover’s family recently experienced a related problem at the Tahoe Forest Hospital in Truckee.
After falling down, Hoover’s mother-in-law was eventually transferred March 19 to the Truckee hospital, where visiting family members were later told to leave the following day without an explanation, according to Hoover.
Hoover was fearful that his family wouldn’t be able to say goodbye to their relative, who was still alive and in the hospital as of Wednesday afternoon. “It was just unfortunate, it’s frustrating,” he said, later adding, “It’s affecting people’s ability to be with their loved ones.”
The Tahoe Forest Hospital would not comment on the situation with Hoover’s family, but a spokesperson for the hospital said visitation is limited, and, alternatively, phone calls are encouraged.

“In general, all hospitals are limiting or eliminating visitors to the hospitals at this time,” wrote the spokesperson in an email.
Sierra Nevada Memorial Hospital also has tighter restrictions to prevent the spread of COVID-19. According to its updated guidelines, the hospital is limiting visitation, only allowing it in certain situations.
While understanding the importance of these changed policies, Hoover’s problems, and for those like him, nonetheless remain. He said the family may postpone a memorial service in case his mother-in-law dies while people are sheltering in place. Whatever happens, though, he’s letting a higher power guide him.“Our whole family is very religious, and we believe that God is in control of the whole situation,” he said. “God’s hand is in this, and we’ll run with it and see what happens.”

FINDING CONNECTION
At his Gold Country Spiritual Center, Reverend Farrell has had to stop in-person services.
While difficult, Farrell said moving his classes and sermons online is still important, if only to allow others to continue interacting, even if it’s through a screen.The other day, the minister said the most popular comment during an online class from his congregation was, ‘It’s just so nice to see each other.’ After the session, the reverend recommended his members continue using FaceTime and Zoom to connect with each other during the week, unrelated to his services. “It’s broadened my awareness of human connection through the eyes,” said Farrell.
The minister has also begun posting photos of his members on the church seats so he can see them every day, despite them not being physically present.
“It’s so moving, it’s so touching,” he said. “It’s like having a congregation present.”
​
Death doula Akhila Murphy is also innovating, remaining in contact over the phone with those in bereavement.
Murphy noted that FaceTime calls, sending letters and reading poems on the phone to the dying can be helpful. Through the pandemic, Full Circle is continuing to virtually connect with others.
“We’re still here for support,” she said. “We want to keep social connections while physical distancing from each other.”
Farrell, too, is trying to remain connected and grieve differently. He’s had his chaplaincy reach out and touch base with people who have health issues and those living alone.
He’s also trying to establish a bereavement group in anticipation of any deaths that will occur from, or unrelated to, COVID-19. At his church, he’s erected a Wall of Remembrance with a photo and associated name of anyone connected to the community who’s died around this time.
Thus far, his brother is the first one to appear on the wall. He’s hoping to hold a memorial service for all of them at his church when people can once again honor, grieve and rejoice in the same physical space.
“Even with people who don’t know my brother,” he said, “for people to just hold that space for me.”
To contact Staff Writer Sam Corey, email scorey@theunion.com or call 530-477-4219.