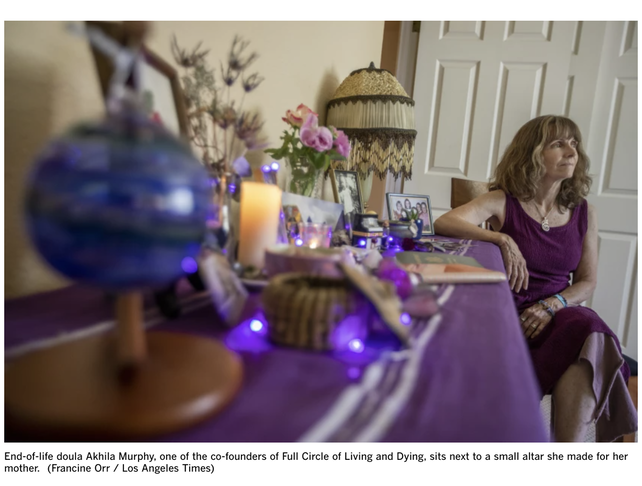 On Valentine’s Day morning four years ago, a group of end-of-life doulas arrived at the Northern California home of Barbara Hazilla just hours after she died.
The volunteers cleansed Barbara’s body, used dry ice to help slow decomposition and then wrapped her body in a shroud of scarves and blankets.

Barbara succumbed to a rare form of breast cancer that was diagnosed in 2010. After more than 30 years as a physician watching patients die in hospitals, only later to be handed off to funeral directors who for 150 years have dominated the American death experience, Barbara decided to be taken care of at home.

Barbara’s younger siblings, Marya and Jon Hazilla, visited her in Grass Valley the day she died. With coffee in hand, the siblings sat at Barbara’s bedside as they whispered stories from childhood. Barbara laid with eyes closed, cheeks hollow, arms crossed.
“Barbara told me that when she died, she wanted to be undisturbed for three days,” Marya Hazilla, 73, said. “The first thing I asked was, ‘Is that even legal?’”

This summer, a federal court judge in Northern California is expected to provide clarity on that very question.
The same end-of-life doula nonprofit organization that assisted in the Hazillas’ in-home funeral is embroiled in a legal battle with the California Cemetery and Funeral Bureau over a nearly century-old law regulating funerals.

The dispute began with a citation filed against the doulas, which was eventually dropped, and prompted them to file a civil lawsuit alleging that their constitutional rights were violated. The outcome of the legal dispute will have major repercussions on what doulas are legally able to do going forward, and whether doulas must become licensed funeral directors if they want to continue some practices.

California’s funeral industry has been regulated by the state since 1939, after a court ruling declared that unlicensed activity in the profession was a threat to people’s health, welfare and safety. The state’s Funeral Directors and Embalmers Act, which has been amended over the years, defines funeral directors as conducting the business of preparing for burial or disposal, or directing and supervising the burial or disposal, of dead human bodies, according to court documents.

Over the last century, the law has protected consumers who might otherwise be victimized by business schemes or unlicensed funeral practitioners.
The Times spoke to several funeral directors who say they feel that the industry should and does welcome new practices, including doulas, and that it is their responsibility to become equipped for a transition to a more holistic death care approach in the U.S. But some doulas said they feel that licensed funeral directors may perceive doulas as a threat to the longevity of their business and could sway families away from traditional funeral homes.

Aspiring funeral directors have to meet a variety of requirements in order to practice, including earning an associate’s degree, usually followed by an apprenticeship, and maintaining a clean criminal record. From there, individuals can apply for a license through the Cemetery and Funeral Bureau.
Death doulas, also known as end-of-life doulas, focus on the nonmedical needs of those near death. Beyond preplanning, these laypersons — who are mostly women — also assist in home funerals and offer advice to families and the terminally ill, often educating them about alternative burial practices, such as green burials or cremation, instead of more costly services calculated into a traditional casket burial.

The funeral bureau serves as an oversight agency and is responsible for issuing licenses to aspiring funeral directors.
When the bureau investigated the doulas in September 2019, it found that they were advertising services on their website that, it asserted, only a funeral director could legally offer. Those services include dressing, washing and cooling the body, and planning visitations and wakes, according to the complaint documents and transcripts filed in U.S. District Court in Sacramento.

“There is a significant portion of what plaintiffs have done that is illegal,” Diann Sokoloff, an attorney for the state Department of Justice, said in November 2020.

But a judge still granted a preliminary injunction and allowed the doulas to practice.
The doulas were then informed they had to obtain a funeral director’s license if they wanted to continue practicing. Full Circle doulas said that they would also be required to go through the procedural steps to become licensed funeral directors, including renting a separate building space for the preparation and arrangement of the bodies. However, Full Circle, and doulas across the country, do not embalm or handle human remains. If they are required to get a license, they say it could cost them upward of thousands of dollars.

“We are not funeral directors, and we don’t want to be,” said Full Circle founder Akhila Murphy, who isn’t seeking any damages in the case. She and her co-founder Donna Peizer, a retired lawyer and co-plaintiff in the case, say they have no interest in going through the funeral director licensing process if not required.

By November 2019, the bureau claimed that Full Circle had broken the agency’s code of regulations, filed a citation against them, and ordered the nonprofit to stop advertising services until it became licensed. But in January 2021, the bureau dropped the complaint, calling the investigation “procedurally defective” and with “inconsistencies,” according to court documents.

Bureau Chief Gina Sanchez confirmed during her testimony in early 2021 that preplanning for end-of-life care does not require a license under the current California statute.
Representatives of the funeral bureau declined to comment about the case.

Nonprofit doula certification associations and universities across the U.S. have been training people to become death doulas for years. Washing and shrouding are not the cornerstones of doula practices, but there are doulas who assist with or perform those services if a family asks them to, according to several experts and doulas in the field who spoke with The Times.

Kris Kington-Barker, a San Francisco-based instructor for the International End of Life Doula Assn., told The Times that ceremonial washing and dressing “is not a funeral practice, it’s a doula support practice. Your neighbor could do that.”

In 2003, the first end-of-life doula training program in the United States was created by a former New York hospice worker, Henry Fersko-Weiss, who said he saw what doulas and midwives did for women after childbirth and questioned why the dying weren’t offered the same care. In 2015, he co-founded the International End of Life Doula Assn., which trains doulas across the country. Today there isn’t an official count of doulas in the U.S., but experts estimate there are thousands.

Fersko-Weiss told The Times that home funeral practices have been happening “since the beginning of time.”
“Doulas are sometimes perceived as being a threat,” said Fersko-Weiss, who retired last year. He added that traditional practitioners, like funeral directors or hospices, “perceive a home funeral as taking income away from them.”

“The funeral industry needs a revamping,” he said. “Doulas can be a real bridge between a family and a funeral home, and in that way, they become a referral source, frankly.”

Until the 1860s, it was customary for Americans to hold funerals inside the home. Relatives would brush the deceased’s hair and dress them while neighbors or church mates were outside digging graves orbuilding wooden coffins, according to New Hampshire Funeral Resources, Education and Advocacy, a nonprofit dedicated to supporting informed funeral consumer choices. By 1882, the National Funeral Directors Assn. was formed as Americans began to rely more on professionals to handle their dead loved ones.

Home funerals are legal in all 50 states, and in recent years, more Americans are dying at home than in hospitals, according to a 2019 report in the New England Journal of Medicine. Researchers expect the home funeral movement to continue to gain the public’s interest as conversations about end-of-life care emerge in the mainstream.

In 1984, the Federal Trade Commission enacted rules that enforced cost transparency between funeral homes and consumers, empowering families. Families were no longer required to embalm their loved ones — a service that can cost anywhere from $500 to $1,000. Consumers are coming up with affordable, creative alternatives to reduce funeral costs, including buying caskets on Amazon or even building them from scratch.

“There’s room for everybody,” Rick Woody, legislative chairperson with the California Funeral Director’s Assn., told The Times. “We wouldn’t want to force just one type of cookie-cutter disposition on humans. We don’t feel threatened by that at all.”

Eddie Tkachuk, 29, the manager of Lassila Funeral Chapels in Auburn, Calif., said that his customers are keen on alternative burial methods, such as green burials and cremation, and are interested in preplanning services, like those offered by doulas.

That interest “has been shooting through the roof,” Tkachuk said. “The thing we hear most often is that [customers] feel like they were at a car dealership,” referencing the relationship between funeral homes and families.

Marya Hazilla said the dignity and serenity of her sister’s at-home funeral provided a stark contrast to the final days of two other siblings who have died in the last decade. Her older brother, Michael, spent 84 days in the hospital sick with stomach cancer until he died in 2010, and years later her older sister, Paulette, who suffered from dementia and falls in her home, died in hospice care.

“Barbara’s funeral helped heal the trauma of their deaths,” Hazilla said.
Now in her mid-70s, Hazilla hopes that when her day comes, she will be in her home alongside her daughter and two remaining siblings. And a doula.
​